If you’ve ever pondered which came first, the chicken or the egg, the surprising answer may be found in the holiday season’s favorite beverage. Eggnog has been around for centuries. In fact, the frothy, cozy drink’s origins can be traced back to medieval Britain! Take a trip back in time with the rich history of eggnog and craft your own merry brew for the cold days ahead with NestFresh!

The History of Eggnog 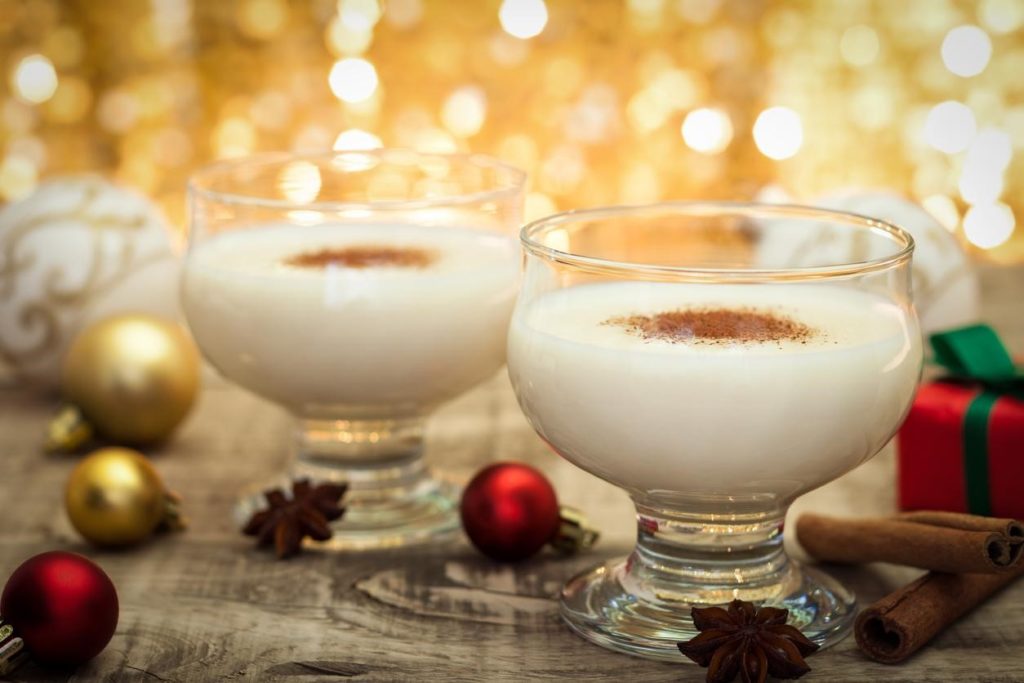 So how in the world did we come up with the idea for this wonderful, albeit strange, spiced egg beverage? While the exact date of discovery remains unknown, historians speculate that eggnog may have evolved from “posset,” a milky ale served hot that rose to popularity in 13th Century Britain. Posset was especially popular in monasteries, making eggnog a “sacred” ritual of winter time coziness.

Later on, drinks made from milk, eggs, and sherry became popular among the nobility and were often used to toast to special occasions. It was common to offer cheers to prosperity and good health in the coming year.

By the 1700’s, the nog had made it over to America with the first colonial settlements. Far removed from the noble halls of medieval Britain, eggnog became a popular drink in colonial America due to the accessibility of ingredients. Abundant farmland and plenty of cows and chickens meant the primary ingredients for nog were in high supply. This allowed for a practical, economic treat. Some even thought the drink contained healing properties and could be effectively used as a health tonic!

Since the advent of the nog, many historic icons have penned their own recipes in celebration of the drink. Spooky author, Edgar Allan Poe, included his signature drink of cognac in the recipe, while George Washington’s preferred brew boasted “a staggering pint of brandy, half pint of rye whiskey, half pint of Jamaica rum, and quarter pint of sherry.”

In the 1940’s and 50’s, eggnog had settled solidly into the category of nostalgia and become a much loved childhood drink. Christmas memories are now replete with fresh baked cookies and a mug of nog. Many families enjoy nonalcoholic varieties for the kiddos and enjoy topping with “extras” like vanilla ice cream, cinnamon sticks, and even turmeric for a healthy twist on an old favorite.

Now that we’ve covered the expansive history of this Yuletide tradition, it’s time to take a look at the perfect eggnog recipe to bring family and friends together this holiday season. Some of us are lucky enough to have the perfect nog brew passed down for generations. For those that don’t have access to great-grandma’s secret recipe or want to start their own tradition, this classic eggnog recipe from Incredible Egg is for you!

In a large saucepan, beat eggs, sugar, and salt, then slowly stir in 2 cups of milk. Heat on low, stirring throughout, until your nog is thick enough to coat the spoon (give it about 15 minutes) or until temperature reaches 160°F. Stir in the remaining 2 cups of milk and vanilla. Chill in the fridge overnight for eggnog that’s ready to serve Christmas morning!

Our favorite part about this recipe is it’s simple and easy to prepare. Modern day eggnog enthusiasts can substitute cooked eggs in this recipe as well and avoid the health risk of traditional raw egg beverages. Best of all, this recipe is rich, delicious, and will quickly become a holiday tradition.

When it’s time to shop for your nog, NestFresh has the holidays covered with wholesome, local eggs from a family farm near you! Our cage free eggs support a humane, eco-conscious lifestyle free of growth hormones and antibiotics. Now that’s a reason to toast!